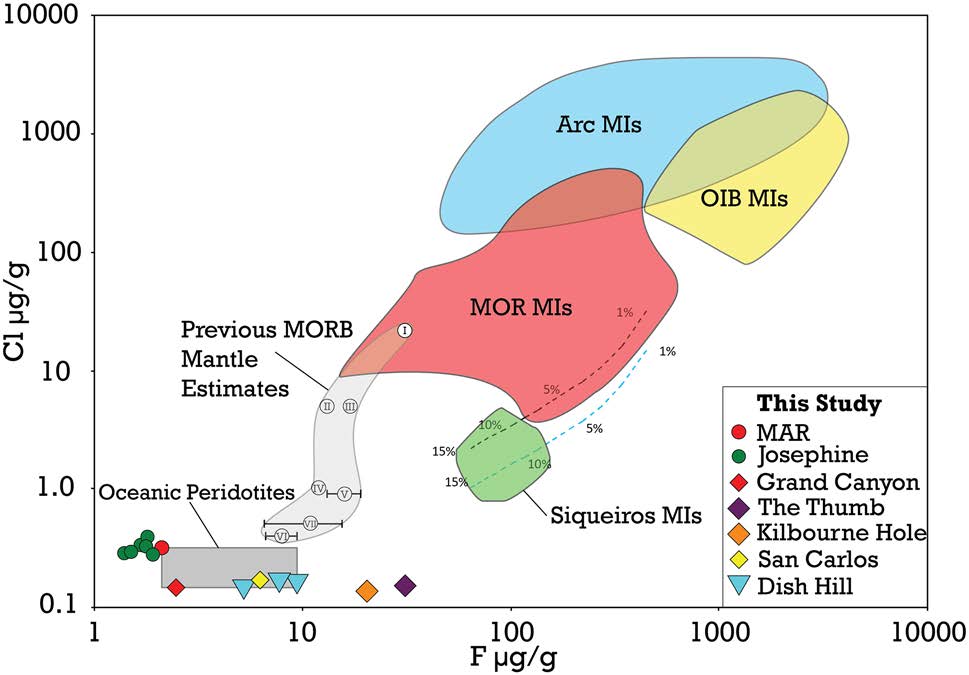 The fluorine (F) and chlorine (Cl) contents of arc magmas have been used to track the composition of subducted components, and the F and Cl contents of MORB  have been used to estimate the halogen content of depleted MORB mantle (DMM). Yet, the F and Cl budget of the Earth’s upper mantle and their distribution in  peridotite minerals remain to be constrained. Here, we developed a method to measure low concentrations of halogens (≥0.4 μg/g F and ≥0.3 μg/g Cl) in minerals by secondary ion mass spectroscopy. We present a comprehensive study of F and Cl in co-existing natural olivine, orthopyroxene, clinopyroxene, and amphibole in seventeen samples from different tectonic settings. We support the hypothesis that F in olivine is controlled by melt polymerization, and that F in pyroxene is  controlled by their Na and Al contents, with some effect of melt polymerization. We infer that Cl compatibility ranks as follows: amphibole > clinopyroxene > olivine ~ orthopyroxene, while F compatibility ranks as follows: amphibole > clinopyroxene > orthopyroxene ≥ olivine, depending on the tectonic context. In addition, we show that F, Cl, Be and B are correlated in pyroxenes and amphibole. F and Cl variations suggest that interaction with slab melts and fluids can  significantly alter the halogen content of mantle minerals. In particular, F in oceanic peridotites is mostly hosted in pyroxenes, and proportionally increases in  olivine in subduction-related peridotites. The mantle wedge is likely enriched in F compared to un-metasomatized mantle, while Cl is always low (<1 μg/g) in all tectonic settings studied here. The bulk anhydrous peridotite mantle contains 1.4–31 μg/g F and 0.14–0.38 μg/g Cl. The bulk F content of oceanic-like peridotites
(2.1–9.4 μg/g) is lower than DMM estimates, consistent with F-rich eclogite in the source of MORB. Furthermore, the bulk Cl budget of all anhydrous peridotites studied here is lower than previous DMM estimates. Our results indicate that nearly all MORB may be somewhat contaminated by seawater-rich material and that the Cl content of DMM could be overestimated. With this study, we demonstrate that the halogen contents of natural peridotite minerals are a unique tool to  understand the cycling of halogens, from ridge settings to subduction zones.